These are the courses scheduled for Spring 2015 that count toward the Film & Media Studies minor. To determine whether other courses may count toward FAMS, please contact the director.

13344 AVT 377-001 Cyberpunk 10:30am-1:10pm MW Art and Design Building 1007 Mark Cooley | Out here in the sprawl, the tchotchke-tech invasion runs at full-tilt. We do our entertainment and infotainment on the go now. It's mostly about us. What we ate for dinner, what we "like". God gave us opposable thumbs and we're finally beginning to discover their full potential. Tapping on screens we (re)construct ourselves in a parallel world where everything exists in quotes, where friends become "friends" and so on. And though our virtual worlds seem infinite, even transcendent, the "infinite" is always inextricably tied to the finite. The iPad battery dies and the world is flat, a thin piece of glass reflecting us as we are. The movie ends, the lights come up and we shield our eyes from the sun as we leave the theater. But the dream lingers on. We check our messages, maybe check-in on fb™ on the way to the car, "like" the movie, and so on... But maybe, just maybe, right now, somewhere in the sprawl or out beyond the wall, a group of shadowy figures raise their fists to a sky the color of television tuned to a dead channel and yell, "Cyberpunk is Dead, Long Live Cyberpunk!"

COMM 302-DL1 Foundation Mass Communication Nader Chaaban
COMM 350-001 Mass Comm/Public Policy 12-1:15pm MW Krug Hall 242 Richard T Craig
COMM 355-001 Video I: Princip and Practice 3-4:15pm TR David King Hall 1011B David Miller
COMM 355-002 Video I: Princip and Practice 1:30-2:45pm TR David King Hall 1011B David Miller
COMM 355-003 Video I: Princip and Practice 4:30-7:10pm T David King Hall 1011B David Miller
COMM 358-001 Video II: Producing and Directing 7:20-10pm W David King Hall 1011B
COMM 360-001 Video II: Video Editing 10:30am-1:15pm R Robinson A352 TBA
COMM 372-001 Sports and the Media 9-10:15am MW Nguyen Engineering Building 1109 Rodger Smith | Today's young sports fan learns the letters ESPN shortly after learning their ABC's. The self-proclaimed worldwide leader in sports is largely indicative of the wild, symbiotic growth of sports and the media. In this course, you get a comprehensive overview of the sports media industry: Performance aspects, producing, historical perspective, business issues, women in sportscasting, sports movies, social media and sports social and cultural issues. This course features guest speakers from various sports media industry perspectives (play-by-play, writing, producing). We even watch the Super Bowl in class, to understand everything from camera angles to commercials to cultural impact.
COMM 380 001 Media Criticism 10:30-11:45am TR Planetary Hall 127 Tim Gibson
COMM 399-006 Special Topics in Communication: Children and Media 9-10:15am TR West Building 1001 Xiaomei Cai | What were your favorite childhood shows on television? Did you watch a lot television when you were a child? One third of our leisure time is spent with mass media. You may be a digital native, but children nowadays are social media native. We use media; we rely on media; and we are addicted to media. However, do you know how your media use in the childhood has affected your life now? Do you know how children nowadays are using mass media and social media? Are you aware of the impacts that media have on children? This class seeks to answer all the questions above by providing a historical review of children’s media in the United States, profiling children’s use of various mass media, but more importantly, dissecting all the effects that media have exerted on children over the years.

17235 ENGH 319-001 Film and Video Forms MW 9-10:15am Rob A349 Cynthia Fuchs | Film & Video Forms focuses on how movies, videos, and TV tell stories, construct subjects, and influence position viewers, by creating convincing, emotionally potent "realities." Looking at how fiction films, documentaries, and television take on similar topics, we'll examine narrative and formal conventions, political and historical contexts, and the effects of budgets, technologies, and commercial culture. Movies and TV may include Actress, The Americans, Beyond the Lights, Birdman, The Double, Elena, Exit Through the Gift Shop, Girlhood, Louie, Lucy, Key & Peele, Point and Shoot, Stories We Tell, The Strain, A Walk Among the Tombstones, and Virunga.

17236 ENGH 319-002 Sports as Media MW 10:30 11:45am Rob A412 Cynthia Fuchs | This course examines the intersections of sports and media, how each experience shapes the other. Our focus will be the diverse and expanding ways sports stories become TV and movies, news and social media, athletes and fans, games and businesses. The course looks at how sports as media convey and counter apparent truths concerning race, gender, class, and age, the identities produced by sports, the effects of celebrity, politics, and historical contexts. Our lens for all this will be current media, so we'll be following social media and watching sports news, TV series, 30 for 30 and Nine for IX, as well as other recent nonfiction and fiction films, TV or web series.

ENGH 470-001 RS Topics in Film/Media History Irish and Australian Film W 4:30-7:10pm Planetary Hall 124 Jessica Scarlata | Coming from countries that were both late to invest in the film industry as a valuable form of cultural production, the films of Ireland and Australia share more than national myths of resistance to British oppression. Both complicate the notion of “national cinema” through narratives that use irony, satire, parody, and what can sometimes only be called sheer lunacy as means to address the wounds of the past while also gleefully shredding any sacredness ascribed to the nation. This course will take an in-depth look at the emotional rollercoaster that characterizes the cinemas of Ireland and Australia, considering historical connections and important differences, particularly where representations of native populations are concerned. Topics to be addressed include: representations of the landscape in film; narratives of traumatic histories; camp, quirkiness, and vulgarity; motifs of trash and destruction; and constructions of ethnic, national, class, and gender identities on screen. Screenings include: The Butcher Boy, The Wind that Shakes the Barley, Road Warrior, Gallipoli, and Rabbit-Proof Fence. Note: this course has an “RS” designation, which means that students will have the opportunity to do in-depth research into a course-related topic of their choice.

ENGH 472-001 Film, Poetry & Social Justice M 4:30-7:10pm R B203 Carla Marcantonio | "One of the questions I often hear is 'How did that happen' as it relates to mind-numbing moments of injustice," says Claudia Rankine, author of Citizen, in a recent interview with cultural theorist Lauren Berlant. This course will investigate questions of citizenship and social justice through film and poetry. How do fact, memory, image and text interact differently in poetry and in film and what may be gained by reading one form of expression through another?  How do these invite us to perceive social reality as unjust and how do they elicit our outrage and wish for justice? In other words, how is the reader of poetry or the viewer of film invited to assume her position as citizen -- as member of a community, of the nation, or the world? Team-taught by Professor Carla Marcantonio (Film & Media Studies) and Sally Keith (Poetry), this course juxtaposes contemporary projects in poetry and film to investigate how art asks us to engage in issues of social justice. The course will begin with a brief overview in order that all students are grounded in the basic critique of poetry and film. Throughout the semester students will be required to write critical essays, though the final project will include an option for creative work (poetry/video) either individually or in collaboration.

FRLN 331-001 International Mysteries TR 3-4:15pm ENG 1107 Michael Jeck | Policier, Serie noire, Giallo, Krimi, Astinomika, Suiri. The mystery, cop show, detective story, thriller is one of the most flexible and accommodating, providing the opportunity for stylistic pyrotechnics by great directors, the dramatization of classic stories and characters, and a unique window into other cultures. Students will discover these films' richly cinematic values, develop critical reading skills, and, perhaps, gain a greater facility in spotting the killer. Films will include M, The Third Man, the Russian Sherlock Holmes, High and Low, and the complete Finnish miniseries Raid.

FRLN 331-003 Latin American Film 7:20-10pm M Aquia Building 346 | This course focuses on the range of films produced across the Latin American regions from the 1960s to the 1980s that were considered “revolutionary,” both for their engagement with social and political themes and for their departure from conventional film genres inherited from the Hollywood industry. The course will survey Latin American revolutionary film from nations across the hemisphere, including Argentina, Chile, Brazil, Bolivia, Mexico, and Cuba. The course also takes an historical perspective, situating the emergence of revolutionary film within international movements of documentary and neorealist cinema of the earlier 20th century and exploring its influence on Latin American movie-making of our own times. Students will be introduced to basic concepts of film analysis and major trends in film studies. Course taught in English and fulfills the university requirement for global understanding.

JAPA 320-001 Japanese Cinema TR 5:55-7:10pm AQ 346 Michael Jeck | This course surveys of one of the world's richest cinemas, from the silent era to the relatively recent, touching on a wide range of genres and subjects, from lightning fast samurai action to the beautiful stillness of Ozu. Our emphasis will be on discovering the particularly filmic values to be found in the works of some of the world's greatest directors. Films will include: Late Spring, Godzilla, Samurai Rebellion, I Live in Fear, and Tampopo. 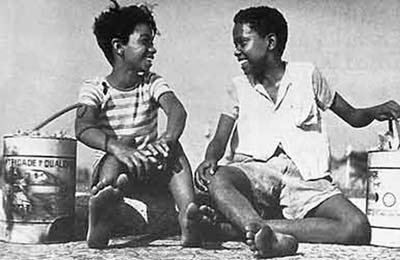 SPAN 375-001 Introduction to Spanish-Language Cinema 3-4:15pm TR Thompson Hall L004 Lisa Rabin | This course serves as an introduction to the study of film as an art form and to the academic discipline of film studies as they relate to the Spanish-speaking world. Conducted entirely in Spanish, the course focuses on students’ acquisition of knowledge on the material and principles of film form -- through the comprehension of such basic elements as film narrative, mise-en-scène, and editing –- and their practice in film analysis of discrete films and film genres of significance within the 20th and 21st centuries. This section concentrates on Latin America, with the musicals, comedies, and the Mexican and Brazilian “Westerns” of the mid-20th century and the “new cinema” of documentary and socially engaged film of the 1960s and 1970s receiving special emphasis. In addition to studying film as an art form, we will also tackle prominent issues in contemporary film studies, such as film theory, historical film reception, and the role of cinema as a form of mass media. Course taught in Spanish.

RELI 362-001: Religion and Film 3-4:15pm MW Krug Hall 5 John Farina | Religious themes, events, and characters have always been a popular subject for film. Are you interested in how religion is represented in film? Do you wonder about how imagination plays a part in film-making and in religion? In this course we will study classic and contemporary films and examine how religion is imagined in the medium of film, including in some popular recent movies. In the process, we will learn more about those religions represented in the films, and wonder together about what that means for our conceptions of ourselves, of our culture, and of our futures.